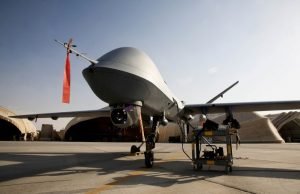 A commander of the militants affiliated with the Islamic State of Iraq and Syria (ISIS) terrorist group was killed in a drone strike in eastern Nangarhar province, local officials said Tuesday.

The airstrike was carried out in Kot district which is home to several militants loyal to the terror group.

Provincial governor spokesman Ataullah Khogyani said the airstrike was carried out in the early hours of Tuesday morning.

He said six people including the commander of the terror group Abulhai were killed in the raid and a vehicle along with a motorcycle and various types of weapons and explosives were destroyed in the raid.

The US forces in Afghanistan have increased airstrikes against the loyalists of the terror group during the recent months with reports suggesting the US Air Force has dropped more than 250 bombs and missiles in January and February months of this year.

Thousands of militants loyal to the terror group were killed or wounded as US Air Force increased air raids which followed by more authorities granted by the Obama administration earlier this year.