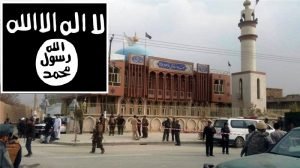 The Islamic State of Iraq and Syria (ISIS) terrorist group claimed responsibility behind the deadly suicide attack on a mosque in Kabul city.

The group issued a statement in Arabic via its media wing ‘Amaq’ news agency and claimed that the attack was carried out by its suicide bomber on a Shi’ite mosque in the city.

The Taliban militants group earlier rejected that the group is involved in the attack.

At least 32 people were killed and 85 others were wounded after the suicide bomber detonated his explosives among the worshipers in Baqir-ul-Olum mosque in west of Kabul city this afternoon.

The officials in public health ministry confirmed that 85 people wounded in the attack were taken to hospitals for treatment.

This is the second deadly attack the ISIS terrorist group is claiming responsibility for within the past one and half month.

At least 18 people were killed and 36 others were wounded after a group of gunmen belonging to ISIS terrorist group stormed into Sakhi shrine in Kabul city last month.

The attack on Sakhi shrine was carried out as hundreds of mourners had gathered in the area to observe the Ashura day.

The group earlier claimed the attack on a major demonstration in Kabul that left at least 85 rally participants dead and scores of others wounded.