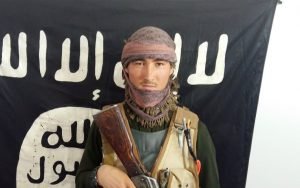 The loyalists of the Islamic State of Iraq and Syria (ISIS) terrorist in Afghanistan have claimed the responsibility for the attack near the stadium in Kabul, claiming that the suicide bomber targeted the intelligence personnel.

The terror group in a statement released online claimed that several intelligence personnel were killed or wounded in the attack.

The statement further added that the attack was carried out by the suicide bomber of the terror group identified as Abbas Al-Khurasani.

The statement by ISIS loyalists contradicts with the information provided by the Afghan security officials who are saying that a security check post was targeted in the attack.

The officials are saying that three people including a security guard lost their lives in the attack and six others were wounded.

The attack briefly resulted into the suspension of an ongoing cricket match in a cricket stadium located in the vicinity of the incident area.

The Taliban militants group had earlier denied the involvement of the group in the attack.

The latest series of attacks claimed by the terror group in Kabul and other parts of the country comes as pressures on the rise amid ongoing offensives led by the Afghan security forces besides the US forces based in Afghanistan conduct regular airstrikes against the hideouts of the terror group.