Taliban have not met their commitments: former Afghan president 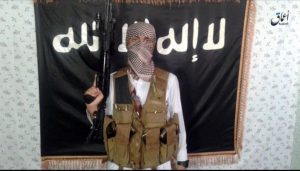 The loyalists of the Islamic State of Iraq and Syria (ISIS) terrorist group claimed responsibility behind a deadly attack on a shrine in Kabul city that left at least 18 people dead.

The loyalists of the terror group released a formal statement through the Amaq news agency which is frequently used by the main group in Syria and Iraq.

A picture of the alleged assailant was also released by the terror group besides the statement in Arabic language.

The attack on Sakhi shrine was launched around 7:20 pm after the gunman stormed into the gathering of the Ashura mourners, taking several people hostage following the shooting spree.

The gunman continued to fight the Afghan security forces for several hours before he was shot dead by the security.

The Ministry of Interior (MoI) officials earlier said at least 14 people were killed and 36 others were wounded but the death toll climbed on Wednesday.

This is not the first time the loyalists of the terror group have claimed responsibility behind deadly attacks in the country.

The group earlier claimed the attack on a major demonstration in Kabul that left at least 85 rally participants dead and scores of others wounded.

Chinese ambassador to Kabul Wang yu said that his country is prepared to continue his country’s...

The Khurasan branch of Islamic State (ISIS-K) has claimed that they have conducted three blasts...

Passengers trying to fly out of Kabul International Airport amid the Taliban offensive wait in the terminal...

A number of women gathered at the gate of the ministry of women affairs-now replaced- and protested...