Afghanistan to take on South Africa in warm-up match today 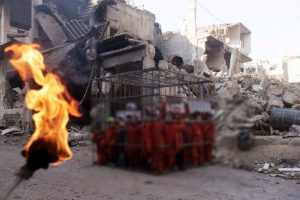 The militants of the Islamic State of Iraq and Syria (ISIS) terrorist group have reportedly burnt at least nineteen Yazidi girls to death after they refused to remain as sex slaves with the terror group, it has been reported

According to the local activists, the incident has taken place during the recent days in the city of Mosul in Iraq.

Abdullah Al-Malla, a local media activist, has told the Kurdish news agency ARA News, that the girls were burnt alive after they refused to have sex with the fighters of the group.

“They were punished for refusing to have sex with Isis militants,” Al-Malla said.

Another eyewitness has also said that the brutal execution of the girls was carried out in an open area and in front of the hundreds of people.

The eyewitness said the girls were locked inside the cage and were set on fire in front of the public as no one could do anything for the victims.

The terror group has been attempting to eliminate the Yazidi people as part of its ethnic cleansing efforts.

According to the reports, the terror group has taken thousands of Yazidi women and girls in their custody, mainly using them as sex slaves.