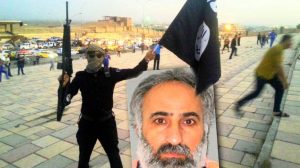 The second-in-command of the Islamic State of Iraq and Syria (ISIS) terrorist group, Abu Alaa al-Afri, has reportedly been killed following a US-led airstrike.

According to Iraqi government officials, al-Afri was killed while attending a meeting at a mosque in Tal Afar.

He had been meeting dozens of militants who also died in the strike, Iraq’s foreign affairs ministry said Wednesday.

According to reports, al-Afri assumed acting command of the ISIS terrorist group last month after Abu Bakr al-Baghdadi, the group’s self-declared “caliph”, was injured in a separate air strike in March.

Al-Afri is a physics professor and longtime senior official of the ISIS terrorist group who has published dozens of publications and religious studies.

He has reportedly trained in Afgahnistan from 1998 onwards as he is thought to have know al Qaeda leader Osama bin Laden.

Described as the strongest men in ISIS after al-Baghdadi, al-Afri is thought to have acted as the link between al-Baghdadi, his inner circle and ISIS’s network of emirs in provinces across their self-proclaimed caliphate.