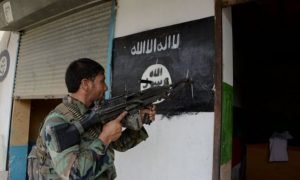 A major plan of the Islamic State of Iraq and the Levant (ISIL) to establish the Khurasan province in Afghanistan has been foiled by the Afghan security forces, the acting Minister of Defense Tariq Shah Bahrami said.

Speaking during a press conference, Bahrami said  the ISIL terrorist group was attempting to establish the Khurasan province under its so called caliphate in Kot and Achin district of Nangarhar.

Bahrami further added that the Afghan security forces have launched 12 large operations so far and dozens of medium and large operations while hundreds of airstrikes have been conducted on the hideouts of the terror group.

According to the acting minister of defense, at least 2,500 militants of the terrorist group have been killed during the operations until now and around 800 others have sustained injuries.

He also added that the loyalists of the terror group were also hit during the operations in Helmand, Farah, Zabul, and Uruzgan provinces.

In the meantime, he said the fighters of the group are only having sporadic and small operations in the named places but do not have the capability to launch large scale attacks.