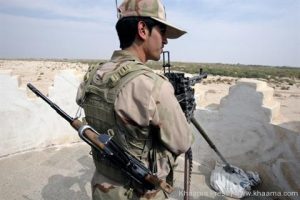 According to local authorities in western Farah province of Afghanistan, at least seven Afghan civilians were killed by Iranian border protection security forces.

A local security official speaking on the condition of anonymity said the deceased civilians were looking to enter Iran illegally to find a job and were shot dead on Afghanistan-Iran border.

The source further added that the incident took place in Lash Joyand district on Friday and the dead bodies of the civilians were taken to this province on Tuesday.

Killing of Afghan civilians by Iranian security forces is not a rare but such incidents frequently take place on the border region between the two countries.

In the meantime provincial governor spokesman Abdul Rahman Zhwandai said at least seven people were killed following the incident and three others are missing.

He said the individuals were drug smugglers and were looking to smuggle 400 kilogram of opium from Lash Joyand district to Iran.

Local residents in Lash Joyand disrict warned to protest against the killing of civilians and urged Afghan officials to respond to Iran security forces attack.

According to reports at least ten people were looking to cross the border and the remaining three individuals have been arrested by Iranian security forces.