Iran is a major threat for Afghanistan security: ex-spy chief 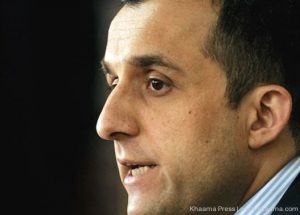 Amrullah Saleh is one of the main opponents of the Taliban group and a prominent political opposition leader of the Afghan government. He is also famous for having a hard stance against Pakistan for its political interference in Afghan affairs.

According to Amrullah Saleh Iran remains a major threat for the national security of the country unless Afghanistan becomes independent and self-sufficient.

Saleh in his article further states that Iran is keen on maintaining a good relation with the government of Afghanistan and on other hand wants to have relations with the political parties and Shi’ite minority groups.

He also points towards Iran’s opposition for the presence of US and NATO troops in Afghanistan and Iran’s preparation to target US military installations in the region specifically Afghanistan during the emergency period.

He also added that the Iranian spy agency is secretly gathering information in Afghanistan and is struggling to improve its relations with various governmental organizations.

According to Saleh the Iranian revolutionary guards has more facilities than any other institution of Iran which has extraordinary and vast operations inside and outside of Iran.

He said the two countries, Afghanistan and Iran has complicated relations despite having close relations.

Saleh says that previously Afghans had negative views only against Pakistan for their interferrence to internal affairs of Afghanistan however the recent policies of Iran have forced the Afghan people to have a similar vision as neighboring Pakistan.