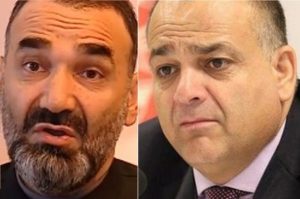 The Minister of Interior Wais Ahmad Barmak met with the Chief Executive of Jamiat Islami Ata Mohammad Noor in Balkh province after recent political developments, involving tensions with the government regarding the upcoming parliamentary elections.

Noor in a statement said the security situation of the Northern provinces and fight against the Taliban and ISIS militants were discussed during the meeting.

He did not disclose further information regarding the meeting but added that a number of other senior officials had also accompanied Minister Barmak during the meeting.

This comes as tensions exist between the political parties and the government regarding the upcoming parliamentary and district council elections.

Noor who is also a member of the Grand National Coalition, had earlier claimed that the government has arrested a number of the sit-in protesters belonging to the coalition in western Herat province.

In an apparent gesture towards public uprisings, Noor had warned that the government would face an ‘unprecedented wave’ from the people if their colleagues are not immediately released.

The Grand National Coalition, consisting of political parties, has closed the offices of the Independent Election Commission (IEC) in three provinces, including western Herat province.

The supporters of the coalition have said the step was taken after the government and the election commission failed to positively respond to their demands.

They have also warned that the election offices in other provinces will also be closed if the government and election commission did not respond positively to their demands.