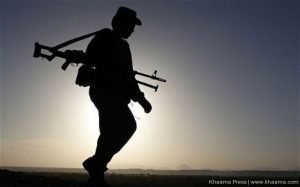 At least five policemen were killed following an insider attack in southern Helmand province of Afghanistan.

According to local government officials, the incident took place late Thursday night in Greshk district after a policeman poisoned his five comrades and later shot them dead.

The officials further added that the assailant militant managed to flee the area following the attack and has taken with him the weapons and ammunition belonging to the other policemen.

Provincial governor spokesman, Omar Zwak, said an investigation has been launched regarding the incident and more details will be released once the investigation is completed.

Taliban group spokesman, Zabiullah Mujahid, claimed responsibility behind the incident and said the attack was carried out by a Taliban infiltrator.

Mujahid further added that seven policemen were killed following the attack and the Taliban fighter managed to flee the area.

He said the Taliban fighter also confiscated six AK-47 rifles, one rocket launcher and a motorcycle following the attack.