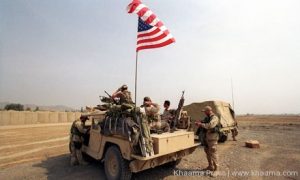 According to local authorities in central-eastern Wardak province of Afghanistan  at least two US troops and three Afghan security forces were killed after an Afghan police officer opened fire inside a police station.

Monday’s incident in Wardak province appears to be the latest in a series of insider attacks against coalition and Afghan forces.

This comes as the deadline for the withdrawal of US special forces from Wardak province has already ended on Sunday.

The source further added, “Members of the ANSF and USSF were wounded and the assailant, who committed this betrayal, was killed during the attack.

Members of ANSF and USSF secured the site and tended to the casualties following the attack. The wounded were evacuated by helicopter to multiple medical facilities to receive treatment and their conditions are currently unknown.

The names of the injured are being withheld pending notification of the next of kin. No civilian casualties or structure damage was reported during the attack. The reason for the attack is currently under investigation.”

Last year more than 60 NATO troops were killed by rogue members of the Afghan security forces.