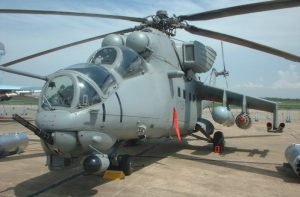 India has reportedly delivered three of the four Russian-made Mi-25 gunship helicopters to Afghanistan with the last gunship to arrive in the near future.

Sources privy of the development in New Delhi have said the gunships were transported to Afghanistan by a C-17 transport aircraft of the Indian Air Force.

Although the officials in Kabul have not confirmed the receipt of the gunships so far, however sources in New Delhi quoted by local media agencies have confirmed the delivery and have said the fourth gunship will be delivered next week.

The local media reports further added that the announcement of gunships delivery will be made by Prime Minister Narenda Modi during his visit to Kabul on coming Friday.

Modi is currently in Russia and will visit Kabul on the way back to home to inaugurate the India built Afghan parliament building.

The delivery of the gunship helicopters to Afghanistan has been branded a major policy shift by the current UPA government as Afghanistan had not received any legal weaponry from India before despite India was the first country Afghanistan signed a Strategic Partnership Agreement with.

India’s military assistance to Afghanistan was restricted o the training of about 1,000 Afghan security personnel every year and the supply of non-lethal equipment.

The decision for the delivery of Mi-25 gunship helicopters was concluded during he recent visit of Afghan National Security Adviser Mohammad Hanif Atmar to New Delhi.