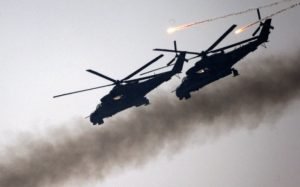 The Indian Prime Minister Narendra Modi is expected to finalize arrangements for the delivery of Mi-25 gunship helicopters to Afghanistan during his visit to Kabul for the inauguration of the new Afghan parliament building, it has been reported.

According to local media reports, India has already delivered the first of the four helicopters to Afghanistan with three others to be delivered in the near future.

The reports further added that the first gunship helicopter arrived in Afghanistan earlier this month while the three others on the way.

This comes reports emerged in mid November that the gunship helicopters will kick off operations with the Afghan Air Force during mid January.

The delivery of the Russian-made gunships by India comes amid crucial need of close air support to the Afghan national security forces who are fighting the Taliban militants on their own during the past one year, since the NATO-led coalition forces concluded their military operation in December last year.

Modi is expected to arrive in capital Kabul for the official inauguration of the newly-built Afghan parliament on coming Friday, although the report has not been independently confirmed by the officials.

Sources privy of the development in Delhi have said Modi is expected to take a stop-over in Kabul on his way back home from Russia.

The delivery of the gunships to Afghan Air Force is considered as major shift in policy followed from the UPA government’s tenure that were willing not willing to provide Kabul any lethal weapons or equipment.

India has remained one of the major contributors in the reconstruction of Afghanistan since the fall of the Taliban regime in 2001 and has invested over $2 billion in different sectors besides training around 1,000 Afghan army and other security officers and men a year.

her security officers and men a year.