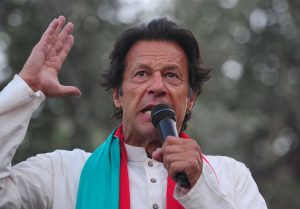 A prominent Pakistani politician has opposed with the fencing of Durand Line with Afghanistan as the issue remains one of the main factors behind the deteriorating ties between Kabul and Islamabad.

In an interview with the Voice of America (VOA), the chief of Pakistan Tehrik-e-Insaf, called on ‘open borders’ and ‘free trade’ policy between the two neighboring nations.

He said “Rather than building fences, I think it should have open, free trade, it should be like a European Union type of relationship. That’s our long term future and this would be of enormous benefit to Afghanistan and Pakistan.”

This comes as the Pakistani military informed regarding the resumption of fencing work along the Durand Line nearly two months ago, saying the step has been taken with an aim to improve security.

The Inter Services Public Relations, media wing of the Pakistani military, in a statement said “Measures to improve the security situation along the Pak-Afghan border continue and phase fencing of Pak-Afghan border has commenced.”

The statement further added the work will be done in two phases, with the first phase to focus on high infiltration prone border areas in Bajaur, Mohmand and Khyber agencies where fencing has started.