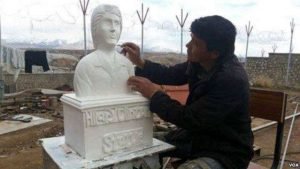 An Afghan prisoner has been impressed by Hillary Clinton’s hopes-giving speeches and statements during her presidential campaign.

Shir Hussain Hoaida, a 34-year-old man who has been serving third year of his six-year sentence in central Afghanistan told Voice of America (VOA) that the Democratic presidential front-runner’s plea for friendship and brotherhood between Christians and Muslims moved him to make the sculpture.

“Hillary Clinton has defended the values of human rights, freedom of speech, equal rights for humankind and freedom of religion for those who reside in U.S. in all her speeches, and that’s why I love her,” he said.

It took Hoaida 30 days to make the sculpture with stucco and steel from inside the Dikundi province jail.

He hoped that Clinton would continue support for Afghans if she is elected president.