Intl-community should let flow of money to Afghanistan, disappointed about caretaker cabinet: UN 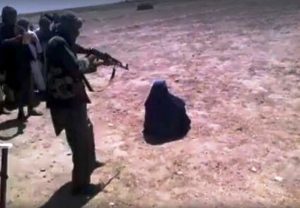 A horrific video has emerged online which purportedly shows the execution of a woman by the Taliban militants in northern Jawzjan province.

The woman was reportedly executed in Khanqa village in Aqcha district with the footage showing the woman is forced to kneel in a dessert before she is shot dead.

The execution is carried out by a Taliban insurgent who has covered his face with a scarf and shooting the woman with an Ak-47 rifle from behind.

The local officials have not commented regarding the report so far to confirm the exact date and location of the incident.

The brutal killing of the woman refreshes the savagery of the group while they were ruling the country in early 90s.

The group executed a woman in a stadium in capital Kabul in a similar way which sparked international condemnation.

The group still continues to try convicts in desert courts in areas where they have influence and publicly execute the convicts after they are awarded death sentence.

The latest video is followed amid concerns by the rights organizations that the condition of the women in northern parts of the country is rapidly getting worse amid deteriorating security situation.

Pakistan provided its second consignment of humanitarian aid to the people of Afghanistan in Kandahar...

Intl-community should let flow of money to Afghanistan, disappointed about caretaker cabinet: UN

UN has said that billions of dollars of Afghanistan have been frozen by the international community...

After the humanitarian aid of Qatar, UAE, and Bahrain Pakistan as Afghanistan’s biggest immediate...

Chinese foreign minister Wang Yi pledged that his country is willing to provide Afghanistan with...