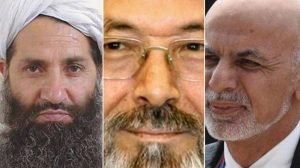 The High Peace Council and Ulemas (Religious Scholars) Council on Saturday urged the Taliban group and the Afghan government to declare ceasefire during the upcoming Eid Al-Adha.

The High Peace Council Chairman Mohammad Karim Khalili said they expect that the two sides would declare a ceasefire for a longer period of time.

This comes as some senior Taliban officials had earlier said that group is considering a four day ceasefire on the occassion of Eid Al-Adha.

“Our friends are advising us that we should announce a four-day ceasefire for the upcoming Eid-al Azha so that the people of Afghanistan can peacefully celebrate their Eid like they did two months ago,” a Taliban official told Reuters last week.

President Ghani had earlier said the government is working on a similar ceasefire during the upcoming Eid Al-Adha, according to the Office of the President, ARG Palace.

He made the remarks during a meeting with the representatives of the registered political parties in Kabul nearly two weeks ago as he pointing towards the successful experience of the ceasefire with the Taliban during Eid Al-Fitr.

Presidential spokesperson, Haroon Chakhansuri had said earlier that there are chances of another ceasefire announcement with the Taliban group during Eid Al-Adha.

Chakhansuri had said the signs of interests are seen on all sides, the government and Taliban, to declare another ceasefire during the upcoming.