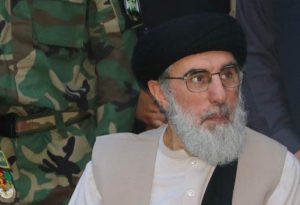 The Hezb-e-Islami led by Gulbuddin Hekmatyar strongly condemned an attempt by an individual to hit the leader of the party with a boot during the Friday prayers, calling it a move hatched by the foreign intelligence.

The party in a statement said an individual who attempted to throw a boot at Hekmatyar and create an atmosphere of chaos during the Friday prayers was caught and beaten by the people before he manage to execute his plans on instructions of the foreign intelligence agencies.

The statement further added that media reports suggesting that Hekmatyar was hit by the boot are false.

According to Hezb-e-Islami, the prayer participants were attempting to punish the man on the spot but was hardly rescued and is currently in custody of the security forces for further investigations.

The main motive behind the attempted attack has not been ascertained so far but unconfirmed reports suggest the man was trying to hit Hekmatyar to avenge the miserable condition his father is suffering from due to the tortures he faced from the members of the party in the past.

Hekmatyar arrived in Herat province last week as he is attempting to lobby among his supporters in support of the peace process.

He signed a peace deal with the Afghan government in September last year.