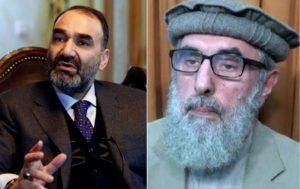 The Hezb-e-Islami led by Gulbuddin Hekmatyar harshly reacted at the remarks of Balkh governor Ata Mohammad Noor, calling the Chief Executive of Jamiat-e-Islami a ‘Warlord’ and slave of the outsiders.

The party published an article in response to the criticisms of Ata Mohammad Noor and questioned his accusations, specifically the slave of Iran accusation, calling Noor slave and defense attorney of Iran.

The party also added that the speech delivered by Noor on Sunday proves that he is a slave and works for the outsiders.

Hezb-e-Islami says its leader expects good relations with all the foreign countries and specifically with the regional States, warning that the party will stand against any moves that are against the interests of the country and its religion and the criticisms by Hekmatyar have always been directed to such conspiracies.

In regards to the question of Noor regarding the whereabouts of Hekmatyar during the war, the party said Hekmatyar was inside the country and has returned and lives with dignity among his people and supporters.

The party compared Noor to an empty Pepsi bottle who has been thrown away after used by the outsiders.

The latest exchange of heated criticisms among the two prominent parties are on the rise during the recent months and specifically after Hekmatyar used strong and hitting words against the Jamiat-e-Islami leaders and figures.

Noor on Sunday called Hekmatyar the ‘Butcher of Kabul’ as he renewed his stance against the latest upheavals, mainly involving the heated exchange of words between the two prominent political parties.

Speaking during a gathering in northern Samangan province, Noor called on Hekmatyar to return to the original place from where he has returned, pointing towards the caves once used by the militants and militant leaders to hide during the conflict.