Indian Army will make Pakistan ‘bite the dust’ in less than a week: Modi

Helmand suicide bomber claims he was trained in Pakistan 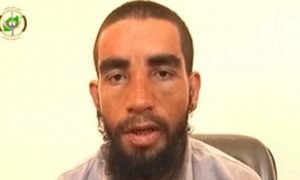 A suicide bomber detained in southern Helmand province claims he was trained on the otherside of the Durand Line, a term used to refer to the tribal regions of Pakistan, including North Waziristan where the notorious Haqqani terrorist network is believed to be baseed.

The Afghan Intelligence, National Directorate of Security (NDS), said a suspected suicide bomber was arrested before he manage to carry out an attack in a busy part of Helmand province.

NDS further added that the detained bomber has been identified as Qari Syed Nabi son of Jilani who was arrested from the vicinity of Lashkargah city, the provincial capital of Helmand.

According to NDS, Nabi was encouraged to carry out the attack by a terrorist Taliban leader identified as Mullah Abbas.

Nabi confessed that he was trained in Pakistan to carry out suicide attack in a busy part of Lashkargah city, NDS said, adding that the would-be suicide bomber was transferred to Helmand by Mullah Abbas to carry out the attack.

Helmand is among the relatively volatile provinces in southern Afghanistan where the Taliban insurgents are actively operating in its various districts and often carry out insurgency activities.

This comes as the Afghan National Defense and Security Forces are busy conducting counter-terrorism and clearance operations against the Taliban insurgents in some of the volatile districts of Helmand.

The Taliban insurgents have sustained heavy casualties during the operations which are being conducted with the support of the foreign forces based in Afghanistan who are mainly providing close-air support.