Hekmatyar declares amnesty for those who fought with Hezb-e-Islami 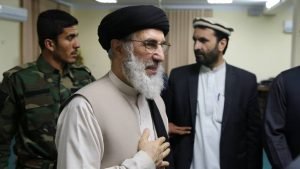 The leader of Hezb-e-Islami Gulbuddin Hekmatyar declared amnesty for those who have fought against the party in the past.

In his meeting with the tribal elders of Herat and Badghis provinces in Herat province, Hekmatyar said “We pardon all those who have fought against Hezb-e-Islami and extend the hand of brotherhood and invite for the tolerance for each other as we do not the previous bitter experiences to be repeated.”

Hekmatayr further added that to reach to a compromise and gather under a national axis is the only way to get rid of the ongoing situation.

According to Hekmatyar, all the parties and groups have been invited to gather under a single roof and put an end to the ongoing differences and the ongoing miserable situation.

In the meantime, Hekmatyar claimed that except Hezb-e-Islami all the other parties are operating with the motives to serve a specific ethnic group or a specific region.

He said the number of political parties have increased considerably and there is a need that smaller parties should come under the influential parties.

The leader of Hezb-e-Islami also assured that the current situation would change soon, the violence will end, and peace and stability will return to the country.