Hekmatyar conditional support to Taliban and their legitimate demands 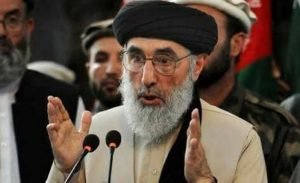 The leader of Hezb-e-Islami Gulbuddin Hekmatyar says his party is prepared to support the Taliban and their demands if the group agrees to join peace process.

Speaking during a gathering of the central council of Hezb-e-Islami in Kabul, Hekmatyar said the party will support the Taliban and their demands once they join the reconciliation process.

He also insisted that immediate steps should be taken to disarm all the groups and individuals or movements that preferring to prolong the war in Afghanistan.

According to Hekmatyar, the foreigners and their supporters inside the country do not want the war and violence to end in Afghanistan.

He did not disclose further information regarding the groups or movements but Hekmatyar in the past has harshly criticized the Taliban for waging a baseless insurgency.

In the meantime, Hekmatyar said his party has no intentions to join the government and they are also not supporting the collapse of the current government.

According to Hekmatyar, they will decide to join the government only if they had proper plans to serve the people.

He also insisted that there is no other proper option available to replace the current government.

Hekmatyar’s call on Taliban to join peace process comes as the group has so far refrained from participating in any form of dialogue, including the quadrialteral coordination group comprising of Pakistan, Afghanistan, China, and the United States.