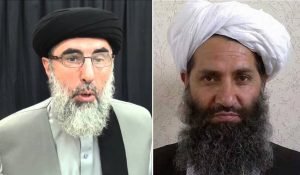 The Taliban militants group in Afghanistan has slammed Gulbuddin Hekmatyar for allowing his party to sign a draft peace agreement with the Afghan government, saying Hekmatyar has committed ‘a major crime’.

“Not only will he face the wrath of Allah for leaving jihad, but he has committed a major crime,” the group said in an article published in its website.

Titled The Concept of Peace In Islam, the group offered scathing criticism of Hekmatyar without naming him, according to Gandhara/RFERL.

“[He is] backing this government by concluding a peace agreement with it,” the article said. “Doesn’t it tantamount to supporting the occupying forces and joining them?”

Questionnning Hekmatyar’s nearly 40-year militant career, which saw him transform from a student rebel in the 1970s into the leader of the most powerful anti-Soviet guerilla faction of the 1980s, the group said “If making peace with the occupiers was of such importance, then why didn’t these peace-loving people make peace with the Russians, who killed 2 million people and their occupation was followed by a brutal civil war?”

“Why has making peace with the United States become a legitimate option now, when it was not acceptable for 15 years?” the group said.

Hezb-e-Islami is the first militant group to sign a draft peace agreement with the Afghan government following a call made by the government to join peace process in a bid to end the ongoing violence through reconciliation process.

The Taliban group however rejected the plea and announced its spring offensive in April this year forcing the Afghan government to give up peae efforts and respond to Taliban’s insurgency with military option.

One thought on “Hekmatyar committed a major crime by signing peace deal: Taliban”