80 killed, over 350 wounded in Kabul explosion 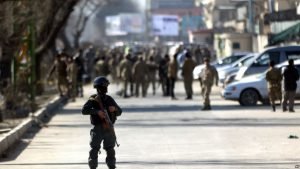 The Ministry of Interior spokesman Najib Danish confirmed the incident has taken place close to the Zanbaq square in the 10th police district of the city.

He said a suicide bomber detonated a vehicle packed with explosives in the area.

A spokesman for the Ministry of Public Health Wahid Majroh confirmed that 80 people were killed 350 others were wounded although he added that the number may change as the victims have been shifted to various hospitals.

The Ministry of Interior in a statement earlier said at least 64 people were killed and over 300 others were wounded in the attack.

Earlier reports by Ministry of Public Health officials indicated that 49 people have been killed in the attack and more than 300 others have been wounded.

The dead body of a man who had been killed mysteriously was tossed out of a car by unidentified...

Raqib Farooqi aka the Iceman of Afghanistan has said that if the necessary arrangements for his...

Mohammad Ashraf Ghani Ahmadzai, the former president of Afghanistan, claimed that he was the last...