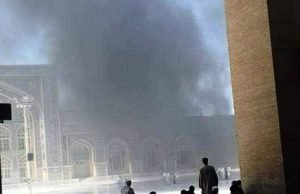 A relatively heavy explosion rocked Herat city in West of Afghanistan this afternoon with the local officials saying at least seven people were killed.

Provincial governor’s spokesman Jilani Farhad confirmed the incident has taken place near the entrance of Jame mosque in Herat city.

He did not disclose further information regarding the casualties incurred to the people but a source in Herat police commandment said preliminary reports suggest at least seven people were killed and nearly 20 others were wounded.

The Ministry of Interior acting spokesman Najib Danish confirmed that the incident took place after explosives planted in a motorcycle went off in Jame mosque.

Najib further added that 7 people were killed in the explosion and at least 16 others were wounded.

This is a developing story and will be updated as new information becomes available….