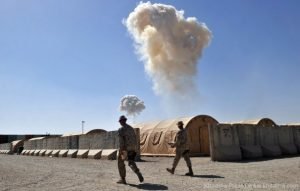 Heavy blast heard in capital Kabul on Sunday morning has been identified as a controlled explosion, which caused panic among locals.

The interior ministry of Afghanistan confirmed the report and said that the blasts took place as a result of controlled explosions.

Sediq Sediqi, spokesman for the interior ministry of Afghanistan said that there were controlled explosions by Afghan National Army (ANA) in 12th and 5th districts of Kabul city.

Similarly, a heavy explosion caused panic among the residents of capital Kabul on Thursday, after a blast took place inside the ammunition depot of the Afghan intelligence – National Directorate of Security (NDS).

Thursday’s blast followed by a suicide car bomb attack near the Kabul international airport which did not incur any casualties to civilians and security forces.

One thought on “Controlled explosions causes panic in capital Kabul”