Heavy clashes underway in the outskirts of Sar Pul city 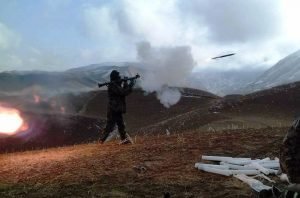 Heavy clashes are underway between the Afghan National Defense and security Forces and the Taliban militants in the outskirts of Sar Pul city in North of Afghanistan.

The local officials confirm the clashes are underway between the two sides since last night.

He said both the Taliban and the Afghan forces have sustained casualties during the clashes but did not elaborate further regarding the exact number.

Security sources are saying that a military base has also collapsed into the hands of the Taliban militants but the local officials have not commented regarding the report so far.

This comes as the security situation has sharply deteriorated in northern Sar Pul province during the recent years amid rampant insurgency led by the Taliban and ISIS loyalists in Afghanistan.

Numerous infighting among the Taliban and ISIS loyalists have also been reported in Sar Pul and other northern provinces besides sporadic clashes between the Afghan forces and the anti-government armed militants.