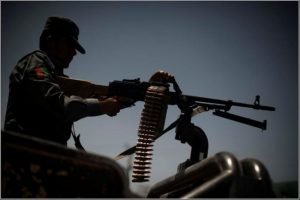 A heavy clash took place between the armed men of the Afghan lawmakers in Mazar-e-Sharif city, the provincial capital of Balkh province.

A security official said the clashes continued for several hours as both sides called in heavily armed individuals.

There are no reports regarding the main reason behind the incident and it is yet not clear if anyone has been killed or wounded during the clashes.