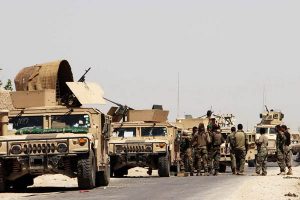 Heavy clashes are underway in provincial capital of southern Uruzgan province of Afghanistan as the Taliban insurgents have launched a coordinated attack to take control of the key district.

Officials in the provincial council have warned that the control of the provincial would soon fall if additional troops and logistics were not provided soon.

The Taliban militants group however have claimed that they have taken control of several security posts as the provincial capital is under the siege of the group.

In the meantime, the association of free journalists of Afghanistan have said the lives of at least 26 journalists are under the threat as the Taliban group threatens the provincial capital.

Uruzgan is among the relatively volatile provinces in southern Afghanistan where the Taliban insurgents are actively operating in a number of its remote districts.

The coordinated attack on Tarinkot city comes as the Taliban group aims to take control of the strategic cities as part of their spring offensive to weaken the government’s stance in the ongoing insurgency that has entered to its 15th year.

A female Afghan investor Nilab who had invested in women driving training center plans to shut her...

Bloomberg has cited a number of US officials that the Afghan airline-Kam Air- has evacuated 155...