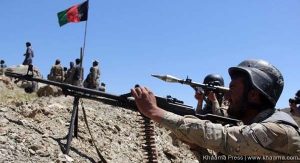 Heavy clashes have been reported between the Afghan national security forces and the anti-government armed militants in eastern Nuristan province of Afghanistan.

According to local government officials, clashes started on Tuesday after scores of militants launched attacks on security check posts in Du-Aab district.

Provincial security chief, Sherdad, said at least two police have been killed and two others have been injured following the clashes.

Sherdad further added that seven militants have also been killed during the clashes which still continues between Afghan forces and the militants.

In the meantime, unconfirmed reports suggest that the control of the district has falled to militants following heavy clashes.

Sherdad confirmed that contact with the local governance has been halted; however, he did not say if the militants have taken control of the district.

The anti-government armed militant groups including the Taliban militants has not commented regarding the incident so far.