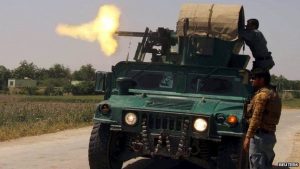 The Taliban militants have launched coordinated attacks in the central city of northern Kunduz along with Chardara and Dasht-e-Archi districts.

The Taliban militants launched their attacks overnight from the western, northeastern and southern parts of the city.

The security forces managed to push back the militants from Kunduz city however sporadic clashes still continue in two other districts, local officials.

Provincial police spokesman Syed Sarwar Hussaini earlier confirmed that clashes took place between the militants and the security forces in the vicinity of 1st and 2nd police district of the city.

He said at least 20 Taliban militants have been killed so far but did not disclose the security forces and civilians casualties.

However, the the provincial public health officials earlier said at least 20 people including 7 civilians and 14 policemen lost their lives in the attack.

The officials further added that 47 others mostly civilians were also injured during the gun battle.

Kunduz is among the volatile provinces in northern Afghanistan where anti-government armed militant groups are actively operating in its various districts and frequently carry out insurgency activities.

The Taliban militants have launched numerous attacks in northern Kunduz province during the months.

The control of Chardara district fell to Taliban control late in the month of this year after the Taliban militants launched a similar attack.

The US military also sent fighter jets to support the Afghan security forces after the militants launched coordinated attacks and overrun security checkposts late in April this year.