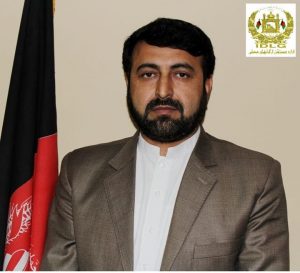 Hayatullah Hayat has been appointed as the new governor for Maidan Wardak province to replace Abdul Majid Khogyani who is removed from the post like others based on initiatives taken by the president in a bid to strengthen local governance.

The organization Independent Directorate of Local Governance (IDLG) that assigns governors and sub-governors recommended Hayatullah Hayat and President Mohammad Ashraf Ghani approved him for the post of governor for Maidan Wardak province.

Tawab Ghorzang spokesman for IDLG confirmed this in a tweet issued today. “Mr. Hayatullah Hayat has been appointed as a new Governor of Maidan Wardak Province.” His tweet stated.

According to IDLG’s information Hayatullah Hayat has adequate experience in local governance.

IDLG trusts that the new governor will have programs for the economical growth, good governance and security of Maidan Wardak province.

With Hayat over half of the 34 provinces of Afghanistan received governors but at least 15 provinces are still governed by acting governors.