Has Saudi Gained Anything In Yemen? 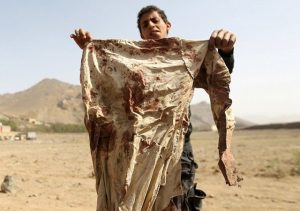 Saudi Arabia announced that it is scaling back its military intervention in Yemen, after more than three weeks of punishing airstrikes failed to drive back the Shiite rebels that have plunged the Arabian Peninsula poorest nation into chaos. The coalition declared that the initial phase of the campaign named “Decisive Storm” had achieved its military objectives by successfully eliminating threats to Saudi Arabia’s security, including the destruction of the rebels supply of missiles and heavy weapons. But this initial campaign of airstrikes by the Saudi led Arab coalition has further destabilized Yemen, helping radical groups such as Al-Qaeda expand their influence there. The coalition’s initial war aim of driving the rebels out of major urban centres, including Sanaa, the capital, has not been achieved. The rebels control most of northern Yemen. The Houthis are still actively fighting to take territory and this could lead to further, heavy clashes. Although Saudi Arabia has characterized operations to date as successful, the Houthis still control large areas of the country and have not been dislodged from Aden, Yemen’s commercial hub. For sure Saudi led Air campaign put a dent in the military capabilities of the Houthis in Yemen but they are still holding strong position on the ground.

Now rumours of a coordinated land invasion from multiple fronts are mounting but that may be very unlikely. Saudi’s knew from beginning that airstrikes alone will not finish off the Houthi movement and its allies in the Yemeni armed forces. It requires ground troops on a huge scale. Riyadh has tried hard to muster a military coalition that is willing to dispatch ground troops but its effort has so far been nothing short of a fiasco. The Pakistanis most famously turned down the Saudi request and let it be known that Yemen is a quagmire they can do without. Instead, Islamabad has asked Iran to push the Houthis for a political compromise that Riyadh can live with. The Turks were enthusiastic at first about stopping the Houthis but in his visit to Tehran Turkish President Recep Tayyip Erdogan made it clear that he has prioritized Iranian-Turkish trade relations over rivalry in Yemen, and emphasized a political solution for the Yemeni conflict. The Egyptians and the Jordanians are still supportive of Saudi efforts and claim publicly to be open to the idea of deploying military forces to assist Riyadh in Yemen. But whether they will go through with it is another matter. Egypt has a long list of problems of its own, including a bloody counter-terrorism campaign in Sinai that it cannot afford to lose, but also an eastern border with lawless Libya that is increasingly a new front in Cairo’s fight against jihadists. The threat from ISIS, will also prevent Jordan from any significant contribution to Saudi military efforts in Yemen.

These hard realities leave Riyadh with two options. It can look for or even mediate a political solution that will invariably include the same Houthis that Riyadh is attacking today. Alternatively, given the absence of willing states to contribute ground troops, Riyadh will have to contemplate a full-scale invasion of Yemen. It’s also not a win-win equation for Iran as well. The Iranians too are faced with stark choices. It is beyond Tehran’s ability to tame the Yemeni crisis. As tempting as it might be for Tehran to see the Saudis bleed in Yemen, the danger of this conflict further fuelling sectarian tensions in the Middle East will undermine broader regional Iranian interests. A political compromise that both Riyadh and Tehran and their respective Yemeni allies can live with seems to be the only option that is not cataclysmic. These airstrikes have proven to be counter-productive for the regional stability. Across southern Yemen, al-Qaeda in the Arabian Peninsula (AQAP) is on the offensive taking advantage of the chaos in the country. AQAP has freed its members from various jails and has raised its flag over Mukalla, a city of nearly four hundred thousand and a major port with critical oil and gas handling facilities. The primary targets of the aerial campaign, beyond critical infrastructure, food factories, and refugee camps, are the Houthis, a Zaidi Shi’a group that has had more success at fighting AQAP in the last six months than the US and its drones have had in the last decade. So in a way Saudi led air campaign has benefitted local Al-Qaida franchisee which is also very much against the ruling royal family of Saudi Arabia. Moreover on the other hand these strikes added to the misery of the defenceless Yemeni people and Anti Saudi sentiments are on all time high among the masses. The International Red Cross says the humanitarian situation in Yemen is nothing short of catastrophic. The Red Cross reports since Saudi Arabia launched its air campaign on March 26, violence has escalated and conditions for millions of civilians in Yemen have dramatically deteriorated.

Only thing which can rebuilt Yemen and put bam on the wounds of the Yemeni people is the composite dialogue. The resumption of diplomatic negotiations with all the political factions is required to put an end to the fighting in Yemen. The Yemeni people deserve the opportunity to hold a peaceful debate about their new constitution, to participate in a credible and safe constitutional referendum, and to vote in free and fair national elections. All the diplomatic and international community measures should be taken in this direction. So, that the vulnerable and poor Yemeni people living in a land, once the home of the world’s oldest civilizations, can find peace.