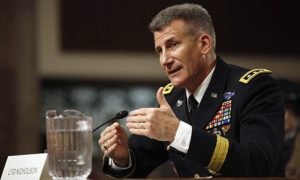 The top US commander in Afghanistan General John Nicholson has said the Taliban and Haqqani network leaders are enjoying freedom of action within Pakistan safe havens.

Gen. Nicholson is the commander of the US forces and the NATO-led Resolute Support mission in Afghanistan.

“The Taliban and Haqqani network are the greatest threats to security in Afghanistan. Their senior leaders remain insulated from pressure and enjoy freedom of action within Pakistan safe havens,” he told the Senate Armed Services Committee on Thursday.

He said “As long as they enjoy external enablement, they have no incentive to reconcile. The primary factor that will enable our success is the elimination of external sanctuary and support to the insurgents.”

Gen. Nicholson also added that Russia has become more assertive over the past year, overtly lending legitimacy to the Taliban to undermine NATO efforts and bolster belligerents using the false narrative that only the Taliban are fighting ISIL-K.

“Similarly, neighboring Iran is providing support to the Taliban while also engaging the Afghan government over issues of water rights, trade, and security,” he added.

This comes as the Afghan officials have long been criticizing Islamabad for remaining reckless to act against the Afghan militant leaders using the Pakistani soil for planning and coordinating attacks in Afghanistan.

One thought on “Haqqani, Taliban leaders enjoy freedom of actions in Pakistan: US commander”