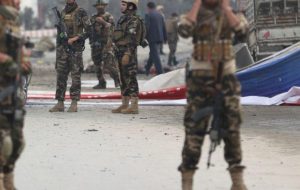 The Afghan Intelligence, National Directorate of Security (NDS), says two of Haqqani Network’s members have been arrested on charges of masterminding attacks in Kabul city.

The National Directorate of Security (NDS) in a statement said the two Haqqani network member were arrested from the vicinity of the 3rd police district of the city.

The statement further added that the two militants have been identified as Feroz Kochi and Rafiullah who were attempting to carry out attacks in the vicinity of the 9th police district of Kabul.

According to NDS, the militants were specifically looking to target the Urban Belt in the 9th police district of the city and carry out various other attacks on political and religious experts and activists of the civil society.

The statement by NDS also added that the two individuals have been trained in Akora Khattak and were sent to Kabul by a commander of the Haqqani network to plan and coordinate attacks in Kabul city.

The anti-government armed militant groups including Taliban and Haqqani network have not commented regarding the arrest of the two individuals so far.