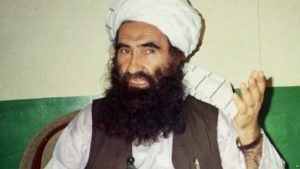 The founder of Haqqani terrorist network Jalaluddin Haqqani has reportedly died a year ago, it has been reported.

Reports regarding the death of Jalaluddin Haqqani are followed a day after the Taliban militants group confirmed the death of their supreme leader Mullah Mohammad Omar.

Reports regarding the death of Jalaluddin Haqqani first appeared in Pakistani medias which quoted sources close the network’s leadership.

No further details were given regarding the exact location where he died however the reports further added that he has been buried in his ancestral graveyard in Khost province of Afghanistan.

The Haqqani terrorist network is accused of staging numerous cross-border attacks from their base in North Waziristan, including the 19-hour siege at the US Embassy in Kabul in September 2011.

The network is considered the most lethal insurgent group targeting the NATO-led coalition security forces and Afghan personnel in Afghanistan.