Haqqani network and ISIS militants among 53 killed in airstrikes: MoD 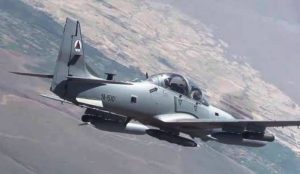 At least fifty three militants including the members of Haqqani terrorist network and the Islamic State of Iraq and Syria (ISIS) terrorist group fighters were killed during a series of airstrikes.

The Ministry of Defense (MoD) said the airstrikes were carried out in the past 24 hours in various provinces of the country.

At least 19 of the militants, all ISIS affiliates, were killed in an airstrike conducted in Achin district of Nangarhar province and at least hideouts, 2 tunnels, and weapons cache were destroyed, MoD said.

The ministry further added that 4 militants belonging to Haqqani terrorist network were killed in a separate airstrike conducted in Achin district.

According to MoD, at least 8 militants were killed and 3 hideouts were destroyed in an airstrike in Gul Tapa area located in the vicinity of the provincial capital of Kunduz province.

The Ministry of Defense also added that 5 Haqqani network militants were killed in a separate airstrike conducted in central Maidan Wardak province.