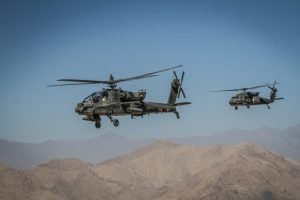 At least 11 loyalists of the Islamic State of Iraq and Syria (ISIS) terrorist group were killed in a series of airstrikes in eastern Nangarhar province of Afghanistan.

The provincial police commandment in a statement said the foreign conducted airstrikes against the terror group late on Sunday night using gunship helicopters.

The statement further added that the loyalists of the terror group were targeted in Janjal Shaga and Shaistagar areas of Achin district.

A Dshk heavy machine used by the loyalists of ISIS terrorist goup was also destroyed during the airstrike, the statement said, adding that the local residents did not suffer any casualties.

The Deputy House Speaker of the Lower House of the Parliament, Wolesi Jirga, Zahir Qadir, earlier warned that the loyalists of the Islamic State of Iraq and Syria (ISIS) terrorist group will establish the Khurasan Caliphate if they managed to seize Tora Bora.

The top US commander in Afghanistan General John Nicholson also said earlier that the loyalists of the terrorist group are attempting to establish a caliphate inside Afghanistan.