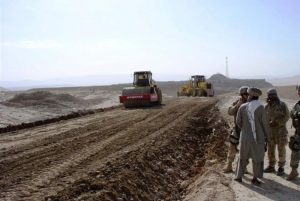 The Afghan government has approved 20 new contracts worth 2.3 billion Afghanis during a meeting of the national procurement commission.

The Office of the President, ARG Palace, said the meeting was chaired by President Mohammad Ashraf Ghani in the presidential palace.

The other contracts approved durign the meetign include procurement of 86 items for Kandahar Breshna Sherkat generators, water supply and canalization project for the residential township in Hairatan in Balkh, solar system and information technology work for Paktia university, and procurement of 24 color items for the ministry of defense’s telecommunication department.

The national procurement commission also awarded a contract with the UNESCO unit for the preservation and documentary making of Mes Aynak area.

A number of pro-Taliban women gathered in Kabul on Monday, January 17, 2022, and said that the Islamic...

Six months after the collapse of the Afghan government chaired by the former president, Mohammad...

A statement of the General Directorate of Intelligence (GDI) of the Islamic Emirate of Afghanistan...

Ministry of Defense of the Islamic Emirate of Afghanistan said that they have started delivering...

One thought on “Government approves 20 contracts worth 2.3 billion Afghanis”