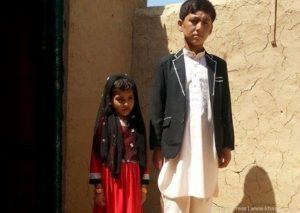 At age 8, Mina married to 12 -year-old Sardar in a rural village, making her only one of more than 10 million underage girls who are being forced to wed worldwide.

The secret wedding ceremony of Mina and Sardar took place in Sholgara district of northern Balkh province in the border with Tajikistan.

Child marriages, which are currently, practiced in several third world countries including Afghanistan, the government passed strong resolution to stop this phenomenon.

In the district of Sholgara of Balkh province, a father named Abdul Momin gave away his eight-year-old daughter Mina to wed a 12-year old boy because he could not support having his daughter live with him.

According to reports the groom family paid 2000 USD to bride’s father as the girl’s price (Mahar).

Afghan experts agree that early marriage prevents the girls from education opportunities and robs them of their childhood because most young wives, burdened by growing responsibilities, do not get a chance to interact with their peers or carry on friendships outside the household.

Mina, the 8-year-old bride from Balkh province who was married off on Friday, was forced to drop out of school, giving up on her dream of becoming a teacher one day.

In several part of Afghanistan fathers often remove their daughter from school even before they are engaged to limit their interactions with boys.

In many cases, the girls are lorded over by their husbands and in-laws, leaving them vulnerable to domestic violence as well as physical, sexual and verbal abuse.

The local Mula Imam (religious leader) who was attended in Nekah ceremony said both families mutually agree and enter into this contract; both bride and groom have the liberty to define various terms and conditions of their liking and make them a part of this contract.

“There is no ban for under age marriage in special conditions in Islam” he said.

The forced marriages of girls to under or middle-aged men are not only common in Afghanistan, but also other countries like India and Ethiopia (South-Asia and sub-Saharan Africa more broadly).

Every year, 10 million girls around the world are forced into marriage before they turn 18.

Girls who marry young – as well as missing out on education – are more likely to suffer poverty, domestic violence, malnutrition, maternal and infant death, obstetric fistula and HIV infection.

Mina  was just a little girl. She probably enjoyed playing outside with her siblings. She probably loved her parents – and did not understand why they sold her into marriage. A marriage that turned out to be her death, and at best would have still meant the end of her life as she knew it.

Almost 39,000 girls around the world face the same possible fate as Mina every single day. That’s 39,000 tragic weddings that are far from a fairy tale.

Although child marriage is against the law in many countries even in Afghanistan, and international treaties forbid the practice, it is estimates that about 51 million girls below age 18 are currently married, often under the cover of darkness and in secret.

In Afghanistan alone, it is believed that approximately 57 per cent of girls wed before the legal age of 16 according to UN investigations.