Ghani thanks protesters for ‘responsibly’ behaving during Kabul demonstration 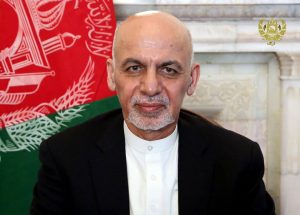 In his speech following the conclusion of demonstrations in the city, President Ghani said “I thank all those who engaged in the discussions and offered their views, analysis, and recommendations in a compassionate way and without having a spirit for chaos and riots.”

President Ghani also thanked the Afghan security forces for maintaining security for the massive demonstration and preventing the enemy conspiracies to conduct destructive activities as the country is on a high alert.

He reiterated that the current year will be a year of mobility for development, promising that he will put all efforts in place to consider balance in the implementation of the projects so that all the people and provinces benefit from the projects.

Hundreds of thousands of people started demonstrations from the west of Kabul city to protest against the change of route for the mega 500kV power project.

The protesters demanded to implement the project through Bamyan and Maidan Wardak provinces and slammed the government for discrimination and injustice.

He also suspended the execution of the project and issued a decree for the formation of a national commission to review the 500kV power project route from Pul-e-Khumri to Arghandi.