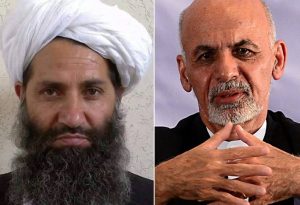 President Mohammad Ashraf Ghani has said the government is prepared to extend the ceasefire for one year if the Taliban leadership is ready for a ceasefire extension.

Ghani made the remarks during a meeting with the members of Helmand peace convoy who arrived in Kabul on Tuesday.

He said if the Taliban group for a three day ceasefire then they can agree for a one year ceasefire as well as he emphasized that the government announced the ceasefire based on the Fatwa of the religious clerics which reflects the will of the entire nation.

President Ghani said the Taliban group should believe in intra-Afghan talks and specify the venue for the talks as he promised that the government is fully prepared for the negotiations.

He said the Taliban group can share all their concerns with the government, prepare a plan, and start talks for the implementation of the same.

According to President Ghani, the ideology must change and efforts for the self reliancy of Afganistan must be a priority which has links to peace and stability.

He told the members of the Helmand peace convy that he is prepared to go anywhere they ask him for the peace talks.

Presiden Ghani also urged the members of the peace convoy to visit Taliban leader Mullah Hebatullah and ask him for peace and reconciliation.