Ghani reacts at fencing work by Pakistan along the Durand Line 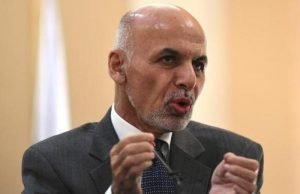 President Mohammad Ashraf Ghani in reaction to the fencing work along the Durand Line by Pakistan, has said the fencing of the line will not result into separation of the nations.

He made the remarks during a meeting with the local tribal elders and members of the provincial council in Paktia province on Sunday.

The Afghan President arrived to Pakia days after a deadly attack on police commandment and training center left scores of people dead.

Offering his condolences regarding the loss of the lives, President Ghani said the terrorist groups should not waste their time to speculate that the Afghan nation would surrender to them because of such attacks.

He said we are in grief because of the loss of lives and disappointed regarding the response of the terror groups despite the Afghan government extended a hand for peace.

President Ghani insisted that the only and best way to end the conflict is an intra-Afghan and Afghan-led peace process and this has been proved with the reconciliation process concluded between the government and Hezb-e-Islami.

According to President Ghani, the environment has changed as the Afghan security forces and Air Forces are getting stronger each day, emphasizing that the enemies of Afghanistan have reached to a conclusion that they can not win militarily.

He said neither there will be any victory through violence and war and nor the Afghan nation’s resolve will be compromised with such attacks.

He said the love, blood relations, and history can not be changed by fencing and only some scissors would be enough to remove the barriers.