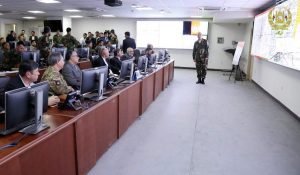 President Mohammad Ashraf Ghani participated in the meeting of the Ministry of Defense (MoD) regarding the ongoing clashes in western Farah city.

Deputy chief of staff and spokesperson to the President, Haroon Chakhansuri, said President Ghani reviewed the situation in Farah city during a meeting with the defense officials and army generals.

Chakhansuri further added that President Ghani also instructed the relevant authorities to take immediate steps to eliminate the threats by deploying additional forces to bring the situation under the control.

This comes as the Ministry of Defense (MoD) says the Afghan National Defense and Security Forces (ANDSF) are effectively responding to the coordinated attack on Farah city.

A statement by MoD said the militants launched a coordinated attack from the North of the city through Regi outpost towards the 70th Division in the early hours of Tuesday morning.

The statement further added that the national defense and security forces have started operations along the 70th division as well as the western gate of the city and 517th lane in response to the attack.

According to MoD, at least eight militants have been killed during the operations so far and at least three others have sustained injuries.