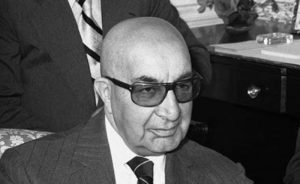 President Mohammad Ashraf Ghani has issued orders for the formation of a committee for the construction of a mausoleum for Afghanistan’s first President Sardar Mohammad Daud Khan.

During a meeting with the tribal elders of southern Kandahar province, President Ghani pledged personal financial contribution for the construction of the mausoleum, saying he will pay $20,000 from his own budget.

The Office of the President in a statement said the tribal elders and influential leaders of Kandahar province led by Mohammad Nader Naeem requested President Ghani for the construction of the late President’s Mausoleum in Taj Bek hill of Kabul.

President Ghani also added that a Fund Box would be set up to collect funds for the construction work of the mausoleum besides the funds that would be allocated by the government.

He said the representatives of the security institutions will also be part of the committee members for the design, planning and construction of the mausoleum.

Born on 19th July 1809, Sardar Mohammad Daud Khan served as the Prime of Afghanistan from 1953 to 1963 before serving as the first President of Afghanistan.

He declared himself as the first president of the country by overthrowing the monarchy of his first cousin Mohammad Zahir Shah in 1973 and continued to serve the country until he was assassinated in 1978.

Well known for his progressive policies, Daud Khan was martyred along with his family members as a result of a revolution led by the People’s Democratic Party of Afghanistan.

Daud Khan was also well known for his efforts for the improvement of women’s rights and for initiating two five-year modernization plans which increased the labor force by about 50 percent.

Wang Yu, the Chinese ambassador to Afghanistan, in a meeting with Amir Khan Muttaqi, the Taliban’s...