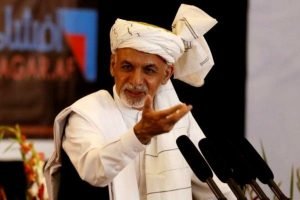 President Mohammad Ashraf Ghani inaugurated two power projects in northern Balkh province of Afghanistan which have been completed with the financial support of Germany.

The Office of the President, ARG Palace, said the two projects were inaugurated in Khulm and Marmol districts.

According to a statement released by ARG Palace, the two projects have been completed with the financial support of Germany amounting to €7.6 million.

The ARG Palace also added that nearly 18 thousand families will benefit from the two projects which have been built with the non-refundable aid of Germany.

In the meantime, presidential spokesman Shah Hussain Murtazawi says President Ghani will also meet with the local officials during his visit to the province.

President Ghani is also expected to hold talks regarding the government’s support to residents of Balkh, Sar Pul, Jawzjan, and Faryab who have been affected due to recent floods.

One thought on “Ghani inaugurate two power projects in Balkh built with €7.6m support of Germany”