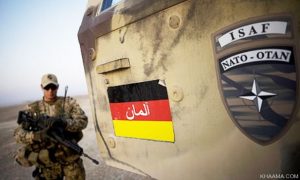 The cabinet of Germany has approved to keep 980 soldiers in Afghanistan until the end of next year to support the Afghan forces as part of the NATO-led Resolute (RS) mission, it has been reported.

The decision by Chancellor Agela Merkel’s cabinet comes days after a deadly attack hit the German consulate in Mazar-e-Sharif city, the provincial capital of northern Balkh province of Afghanistan.

“With up to 980 soldiers, the German army will in future advise, support and train Afghan security services,” Reuters reported, citing a statement issued by the government of Germany.

However, the parliament of Germany must approve the decision by the government to keep the troops until the end of 2017.

The majority of the German troops are based in northern Balkh province of Afghanistan as the country leads the NATO-led Resolute Support (RS) mission in northern Afghanistan.

The attack on German consulate in Mazar-e-Sharif took place last Friday after a group of militants launched a coordinated attack by detonating a Vehicle-borne Improvised Explosive Device (VBIED) near the consulate compound.

At least 4 people were killed and around 100 others were wounded in the attack which the Taliban group claimed responsibility for.