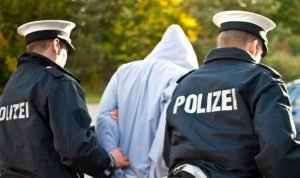 Two Afghan nationals have been arrested by the police in Germany over the death of a young German man, it has been reported.

The German prosecutors and police have confirmed the arrest of two Afghan migrants in connection to the death of a 22-year-old man in Köthen city.

No further details have been given in this regard but the authorities have said a thorough investigation is underway into the death of the young man.

The 22-year-old German was wounded during a fight with the two Afghan men and succumbed to his injuries in a hospital late on Saturday.

The 30-year-old convict whose identity was disclosed by the authorities was awarded a life term by a court in the town of Traunstein earlier this year.

He had murdered a 38-year-old woman and a mother-of-four, in front of two of her children outside a supermarket in the southern city of Prien am Chiemsee last April. She was stabbed 16 times.

Prosecutors told the court in the town of Traunstein that the accused was furious because she had turned her back on the Islamic faith, according to AFP.