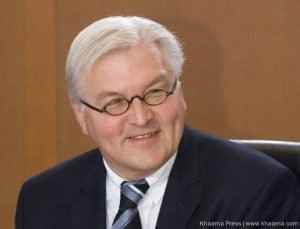 He vowed Germany’s continued support to Afghanistan, however he said that the year 2014 was not only a key year for Afghanistan, but also a turning point for the German commitment.

He is also scheduled to hold talks with president Hamid Karzai during his visit capital Kabul, and is expected to hold talks on Germany’s commitment to Afghanistan and the upcoming presidential elections.

The visit by Steinmeier came shortly after Germany’s cabinet decided to extend the German forces deployment to Afghanistan by the end of 2014.

The majority of the German troops will withdraw from Afghanistan along with the other NATO forces by the end of the year.

Germany is considering to leave around 800 soldiers in Afghanistan beyond 2014, to advise and train the Afghan national security forces, provided the accords are signed by the Afghan government.